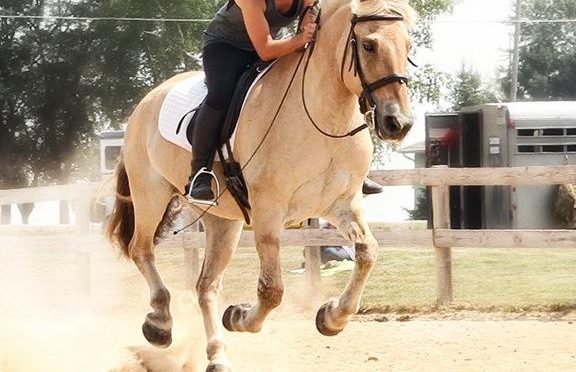 The Norwegian Fjord Horse is one of the world’s oldest and purest breeds. It is believed that the original Fjord Horse migrated to Norway and was domesticated over 4,000 years ago. Herds of wild Fjord Horses existed in Norway after the last ice age. Archaeological excavations at Viking burial sites indicate that the Fjord Horse has been selectively bred for at least 2,000 years.

One of their unique characteristics is that approximately 90% of all Fjord Horses are brown dun in color. The other 10% are either red dun, gray, white or “uls” dun, or yellow dun. The Fjord Horse retains the “wild” dun color of the original horse as well as the primitive markings which include zebra stripes on the legs and a dorsal stripe that runs from the forelock down the neck and back and into the tail. Dark stripes may also be seen over the withers. Red duns have reddish-brown stripes and body markings. Gray duns have black or very dark gray stripes and markings. The white or “uls” dun is a very light body color with black or gray stripe and markings. The yellow dun have a darker yellow stripe and markings, they may have a completely white forelock, mane and tail. The yellow dun is a very rare color in the breed.

Another unique characteristic of the Fjord Horse is the mane. The center hair of the mane is dark (usually black) while the outer hair is white. The mane is cut short so it will stand erect. It is trimmed in a characteristic crescent shape to emphasize the graceful curve of the neck The white outer hair is then trimmed slightly shorter than the dark inner hair to display the dramatic dark stripe.

The head and neck should present an appearance of elegance without coarseness. The head is medium sized and well defined with a broad, flat forehead and a straight or slightly dished face. The eyes are large. Ears are small and alert. The neck of the Fjord is well muscled and crested. The body is short coupled with good depth, large heart girth, and well developed muscles. The legs are powerful, with substantial bone and excellent feet which are black in color. Fjords generally range in size from 13.2 to 14.2 Hands and weigh between 900 and 1200 pounds at maturity, with a few individuals ranging outside these measurements.